This was written on December 3-4 2020 in reply to an e-mail message. It is preceded by Putting the Pressure On, The End of Purity, Brian Harner Phonecall 11/01/2020 (as I mentioned in Brian Harner Update #2), and, indirectly, Last Phonecall with Brian Harner.

The point of Brian's message is continued existence along a certain path available to intelligent life. The purpose of that path is transcendence, which means about the same as “ascension,” or, “increasing the level of intelligence.” Each level of transcendence comes with the ability to create more and more complicated things, from physical objects (humanity’s current level), to individual lifeforms, to entire planets, to entire dimensions, to entire universes (God’s level). This is not supposed to be centered around individual lifetimes, nor the emotional concerns that result from prioritizing individual lifetimes over the long-term survival of the species. Individual lifeforms and emotions cannot even exist if the planet does not survive.

The Earth's carrying capacity is declining, and that is basically due to mis-prioritization. This means that humans have placed short-term emotional, social, monetary, and sexual interests over long-term survival interests. The way an effective large-scale solution is ideally “supposed” to go is that each person recognizes what is the best they can do to serve the long-term survival of the planet and species, and then chooses to do so without being forced. Up to this point, people have mostly done the opposite of that.

I posted the transcript of Brian Harner on the Environment earlier this week. That conversation explains a number of things that are going wrong with the Earth's environment and how those problems can be solved.

The one command given by God is that all intelligent lifeforms, including humans, have free will. That is why God does not intervene in the choices that we make. Our choices have physical effects, including effects which can ultimately bring about the end of our existence. God is not the same being as Humanity’s Maker. God created the entire universe, whereas Humanity’s maker created species that live in the third dimension of the universe (the third dimension is generally referred to by humans as “physical reality,” or, “the entire known universe”). It is impossible to know exactly what God needs in order to transcend since he exists outside of this universe (and maintains it through a cavitation sequence). We do know that the ultimate reason we exist is to help God transcend. We exist because of him, and we exist to serve him. He does not exist in order to serve us. The same is true of humanity’s maker. Intelligent species exist in a hierarchy, and each one is “supposed” to serve the species that created them.

The giants were here when humans were first given intelligence (on Earth) 36,000 years ago, but humans kicked them off the planet. One of the major reasons we have not received help from other intelligent species is that they would almost certainly be distrusted or treated violently—especially with the current level of military technology. In other words, humanity is currently not in a mindset where it will even allow itself to receive outside assistance. Even if a few people would welcome this assistance, that is not enough to stop other people from blocking it.

A strong contributing factor to cancer is the weakening of the magnetosphere: this is explained by Chan Thomas in The Adam and Eve Story. An abridged version of this book was released by the CIA in 2013, though the book was originally published in 1963. The majority of humans contribute to the weakening of the magnetosphere through their use of devices which are powered by large-scale electrical infrastructure. Brian explains it this way:

“Utilizing the radio wave spectrum in congruence with electricity production through an unsustainable method of fuel energy usage is exactly why the magnetosphere is deteriorating. Ever hear of a magnetic chuck? Google it, learn how it works, then come tell me who "chose" to use electricity in a demagnetizing fashion on a global scale... AND what doing that on the ground does to the magnetosphere.”

The radiation from the electrical grid which affects the magnetosphere is called, “power line harmonic radiation.” Satellites in space might have the largest effect on Earth's magnetosphere since they are located directly in it. The following links are relevant:

https://archive.vn/hDUx8 “Magnetospheric Effects of Power Line Radiation.” (I have the full pdf.)

https://archive.org/details/pdfy-uFS7t2QiFyjqB0sU The Body Electric: Electromagnetism and the Foundation of Life by Robert Becker. From page 325-326:

Around 1900, Nikola Tesla theorized that ELF (extremely low frequency) and VLF (very low frequency) radiation could enter the magnetosphere, the magnetic field in space around the earth, and change its structure. He has recently been proven right. The magnetosphere and its Van Allen belts of trapped particles produce many kinds of EMR. Since they were initially studied through audio amplifiers, the first kinds to be discovered, around 1920, were given fanciful names like whistlers, dawn chorus, and lion roars. Many of them result from VLF waves produced by lightning, which bounce back and forth from pole to pole along "magnetic ducts" in the magnetosphere. This resonance amplifies the original VLF waves enormously. Satellite measurements have proven that artificial energies from power lines are similarly amplified high above the earth, a phenomenon known as power-line harmonic resonance (PLHR). Radio and microwave energy also resonates in the magnetosphere. This amplified energy interacts with the particles in the Van Allen belts, producing heat, light, X-rays, and, most important, a "fallout" of charged particles that serve as nuclei for raindrops.

Here are two screenshots of Part Two of Chan Thomas' book, The Adam and Eve Story: 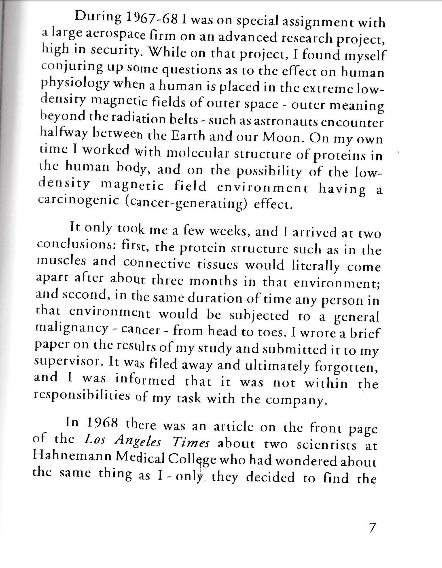 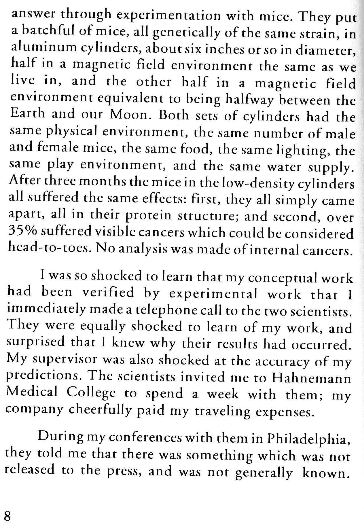 Anyway, again the point is that nothing should be reduced to merely emotional matters: there are definite, objective, and physical causes for everything we experience. Humans collectively make choices which affect the physical world and result in the experiences we have. For example, our use of radio and electrical technlogies have contributed to physical-world conditions which in turn have contributed to cancer occurring on the scale that it has. Though we did not create physical reality, we always have the ability to affect what happens within it. That ability depends on the knowledge we have, since we cannot make choices that we are not aware of. Humans are not gods, but we are meant to be God-apprentices. We are undergoing an extremely long training process at which we are not guaranteed to succeed. For any intelligent species, success (i.e. transcendence) in this training process requires yielding to both the physical laws they were created with and the path set forth for them by their maker. Success also requires that individuals take responsibility for both the choices they make and the consequences of those choices. Blaming God for manmade problems is the opposite of taking responsibility.

Jesus did not die on a cross to prove a point (though he did demonstrate that he was non-violent). Jesus was sentenced to death and killed by people who used their free will to do so. That is covered, at least partially, in John 19. A person who tries to be exactly like Jesus would likely face the same end-result.

There is no afterlife location known as “Hell.” The various intelligent species that created the universe and everything inside of it have had no reason to construct a place in which individual souls are tortured forever: such a place would be nothing more than a waste of their resources. The only “Hell” is a certain set of physical conditions, and those conditions exist on Earth right now. Hell is the result of relying exclusively on burning physical substance in order to produce energy. Furthermore, a number of the physical substances burned on Earth- such as crude oil, coal, and wood- are not carbon-neutral: this means that utilizing them contributes to transfer of carbon from the Earth to the Earth's atmosphere, in the form of carbon dioxide. The carbon dioxide released by burning these fuels is not returned to the Earth to complete the carbon cycle: instead it remains in the atmosphere and contributes to the melting (at a net-loss) of the polar ice caps that is taking place. The (indiscriminate) burning of physical fuels and the net-loss of the polar ice caps both are defining characteristics of Hell.

The way to end Hell is to adopt a different energetic paradigm, in which degradation of physical substance is not required to produce energy. In this different paradigm, sound is used to produce resonance, vibration, acoustic propulsion, and cavitation. The resonant object that Brian built is capable of using sound in a productive manner. Instead of running on physical fuel, this object is designed to receive and transfer vibrations produced by a specific sound frequency. This sound frequency can be produced by the male voice. When utilized with this specifically-designed object, this frequency is capable of cutting through stone, through a phenomenon called “harmonic resonant micro cavitation.”

One of the reasons for teaching purity is that if alternate forms of technology co-existed with a degenerate mindset, the technology would likely be utilized in a way that causes physical destruction at a pace far more rapid than the current one. For various reasons, Brian did get to complete a blank (i.e. foam structure) of his invention, but he did not get to create the bell metal bronze cast necessary to its functioning. If completed, the stone-cutting resonant object would serve as the most obvious form of proof of all that Brian has said. The conundrum is that the presentation of this proof would not produce fundamental change in the human mindset. When Brian explained in his book how the grail (i.e. the resonant object) works he was not sure that he would get the chance to actually build one himself, partially due to his health. He ended up having enough time and resources to complete a blank. Once the obstacles to metal-casting the blank became persistent, Brian figured it was just as well that he did not get to complete the grail. It would have been ideal if a significant number of people demonstrated interest in the long-term survival of their species first, as well as in the grail's role in that survival. Then, with the proper mindset having been established, Brian would present a completed device which would help people to achieve that long-term survival. He would also present means for producing more grails on a large scale. Of course, the ideal change in human mindset has not taken place, so these things have not happened. In addition to the other obstacles, he has been bedridden for about the last three weeks, so another chance for him to complete a grail might not arise. Anyone else can take it upon themselves to build one, but they will also have to deal with the fact that the change in human mindset has not taken place.

I have taken interest in Brian’s message because he provides the most complete picture of life that I have ever seen. Overall, the time for searching for answers regarding how or why to live is over. Now it’s do or die.